FILM DEVELOPMENT FOR HIRE: A STEP BY STEP SUMMARY

New filmmakers often come to me with an idea for a film, but no idea how to navigate the development process. My formula is rather simple and straight forward, and I've decided to share the basic steps with you below. These steps assume that you 1) have a story idea but no script and 2) have money to hire me but not yet money to make the film. 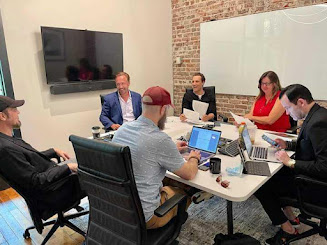 Story Development: We need to flesh the story out. We start with a one- to two-page synopsis. Once the broad strokes are there (structure, character, conflict, etc.), we move to a more extensive treatment where we work out specific details of the plot. Breakdowns for the lead and key supporting characters are also helpful to determine their motivations and flaws. From here, we can create a beat-by-beat scene outline for the entire script.

Screenplay: You can now go off for a month or two and write the script based on the outline we created, focusing on details like setting, dialogue and character quirks. We may go through several drafts of the script as I provide notes on the execution, but by the end of the process, we'll have a script you can be proud to share with third parties.

Budgeting: If you're going to shop your project to investors, the first thing you need to know is how much it will cost (the "money in"). We'll tailor a target budget range based on creative considerations, the scope of the project and how much money you think you can raise. From there, I can prep the shooting script, break it down, run a schedule and, with all this information, create a detailed line-item budget that provides a real blueprint for production.

Pitch Deck/Business Plan: We also need to show investors why this is a worthwhile project and how they are going to get their money back (the "money out"). The deck will serve as a useful tool for both. It will detail the filmmaker's creative vision for the project, showcase the players involved, reveal comparison projects, and often includes cast wish lists, revenue projections, ROI scenarios and foreign sales estimates (which I procure through a sales agent based on the desired cast and project type).

Packaging: Most investors want to know who will be directing and starring in the project. With a small amount of development money in hand for deposits, we can approach legitimate, recognizable directors and actors with offers. Typically, we'll approach directors first, as cast usually wants to know who is directing before committing, but this could vary depending on circumstances.

By taking this journey, the idea is that by the end you'll have a solid package to take out to investors so that you can raise the money you need for your project. At that point, you can choose to come back to me (or not) for my help in shepherding the production and post processes.