As we wrap up the first quarter of 2020, sheltered in place and self-quarantined from the outside world, I find myself pondering not only what's happened but what the road ahead looks like. First, I can safely say the year has been anything but boring. Between Kobe, COVID-19, election-year politics, and a tumultuous roller coaster of a ride producing "The Inheritance," there have been many things to cry, yell or shake my head about.

But I try to remember that we humans are nothing if not resilient. We're capable of finding optimism and hope even in the most desperate of times. The silver lining of tragic events is that it brings us closer to one another (or should) -- working, fighting, praying and rebuilding as a team the way humans are wont to do.

We can look upon this era of solitude and isolation as a time for retrospect and self-examination. To think about who we are as individuals and what we really want to accomplish with the time we have here on this little blue marble. Moreover, we can use it as a time to be productive. Writers in particular have lots of time to work on their latest opuses, perfecting and fine-tuning so that their material is in ready shape for when Hollywood opens its collective doors again.

In the meantime, to help spur both the incentive and imagination of screenwriters out there struggling with where to start, I've pasted below my latest published article about the best-selling screenplay genres, which was recently published on FundsforWriters.com. So try to look on the bright side of things -- this time was set aside for you (and you alone) to create something great. Enjoy the read.

As a screenwriter, working out the crux of your story is a daunting enough task, but let’s rewind even further. How do you determine what genre to work in? After all, this is a crucial component to creating material that Hollywood wants to buy, right? So, how do you know which genres have the best chance of selling? There isn’t some magical way to access this mysterious information, is there? Surely, the film gods keep such knowledge under lock and key!
Actually, there’s good news: this info not only exists, it’s readily accessible if you know where to look. (Drum roll, please.) Ask a sales agent. They deal with film buyers around the world every day and can pass on valuable insights regarding what’s selling and what’s not. You can approach sales agents at film seminars and conferences, during festivals or markets like AFM (American Film Market), via personal contacts, or if all else fails, by cold calling with a plea for guidance. Here’s a fairly comprehensive list of Hollywood sales agents.

Below are six genres that, according to a prominent sales agent I know, have consistently attracted buyers, and with no signs of abating.
Gender-Neutral Action
Action films have a long, battle-tested history of selling well around the world, regardless of territory. Why? Because unlike drama or comedy, action faces no language or cultural barriers. While something that’s funny in the US may not translate in India or Spain or Japan, explosions and car chases elicit the same thrill everywhere. Gender-neutral simply means the story is broad enough to attract both men and women. Think Fast & Furious or Terminator. Oh, and avoid straight martial arts stuff, which is too oversaturated in the market due to its lower budget requirements.
Female-Driven Thriller
The woman-in-peril sub-genre of thriller has generated reliable interest in the television and home entertainment markets thanks to female audiences hungry for strong, relatable women overcoming insurmountable odds, often against an otherwise dominant masculine figure. Enough or Sleeping with the Enemy are prime examples. Lifetime really popularized this type of story with a steady stream of weekly movies that have proven to be ratings gold.
Kids & Animals
W.C. Fields gave birth to the infamous Hollywood trope, “Never work with children or animals.” But as a screenwriter, live-action family films with an adventurous group of young tots or a couple of frisky felines could be a bullseye with a distributor. especially if the animals talk. (Yes, I’m serious.) Think The Sandlot or the Air Bud franchise. It’s the type of G-rated fun parents can show their seven-year-olds without having to do “earmuffs” every five minutes. Moreover, parents tend to spend the extra dough buying rather than renting these films because they expect to watch them over and over.
Disaster
Disaster films have been exciting audiences for decades, reaching a high-water mark in the 1970s with titles like Earthquake and The Towering Inferno. Such stories can be more global in nature like 2012 or local like Dante’s Peak. They can be natural like The Day After Tomorrow or supernatural like Independence Day. And they can skew more dramatic like Deep Impact or be action-oriented like Armageddon. The common thread is simply a larger-than-life existential threat to a defined population.
Female POV Rom-Com 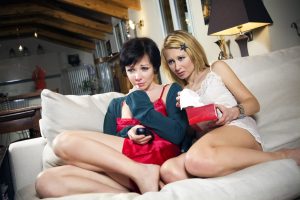 Romantic comedies are perhaps the most successful form of comedy film globally since relationships are universal, making the storylines (and laughs) more accessible to foreign audiences. However, it’s critical to maintain a female point-of-view for greater marketability since the ladies drive this genre’s box office. Think Pretty Woman or How to Lose a Guy in 10 Days. Buyers point to exit polling data that show women are more likely to invest their time in a story with a relatable protagonist. In other words, it’s something that could happen to them!
Faith-Based
Many distributors note that this heavily overlooked genre is among the most profitable due to the fact that such films have rabidly loyal audiences, little marketplace competition, and can often be produced for extremely low budgets. Films like Fireproof and God’s Not Dead generated gross revenues that multiplied their production costs many times over and, in the latter’s case, spawned a couple of sequels that were equally successful. Such films don’t have to be overtly religious as long as they’re centered around a moral or message rooted in the Judeo-Christian ethic.
Posted by mhfilmz at 3:40 PM No comments: