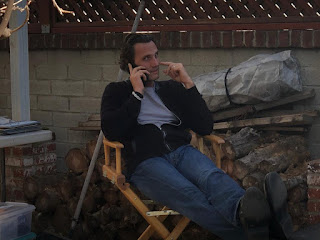 Why did I title this blog post "Slammed?" Because that's how I feel right now -- slammed with work, with with social obligations, with maintaining my lifestyle, with just about everything, Don't get me wrong, I'm not complaining. I'd much rather be busy than bored. But I can't say I haven't been dreaming about a little downtime. 2022 has been an exhausting year, both for reasons within and outside of my control, and sometimes it's nice just to vent a little bit. But I admit I'm very blessed, and the following paragraphs are just more proof of it.
First, I thought I'd follow up on the status of some of my projects mentioned in my last blog post from January titled "What's New in '22":

- The script I mentioned rewriting, "The Odd Son," picked up an Honorable Mention from the LA Film Awards in March after ascending through the Quarterfinal, Semifinal and Final rounds. It has continued to rack up additional accolades ever since, including Honorable Mention in the Big Apple Film Festival Screenplay Competition and Finalist in the Santa Barbara International Screenplay Awards.

- I wound up going to North Carolina in late March/early April to produce the pilot for horror series "The Montgomery Murders." Unfortunately, reasons outside of my control led to a total shutdown of production. While I'm disappointed that the pilot didn't get completed, I'm proud of what we shot and what I was able to accomplish despite myriad obstacles and challenges.

- BondIt's coverage of "Worth the Fight" was strong and the producing team -- consisting of me, Jon Keeyes and fellow writer Rocco Palmieri -- have started working with BondIt to package the film, most likely for a late 2022 or early 2023 production start.

- Miramax wound up passing on "American Saviors;" however, I was able to raise $150,000 in private equity through an investor shortly after to help us package a few A-list names. While that might not seem like a lot, a small pay-or-play deposit against a much larger fee can go a long way in getting an actor attached. I will also be working alongside Jon Keeyes on this project, with BondIt as a potential financier.

- Sony Pictures Animation and Warner Bros Animation both wound up passing on "SPACEjunk!", but with all of the other projects I have going on, I'm not sure I'd have time to focus on this one anyway.

- "Take the Night" was picked up by Saban Films and will be given a limited five-city theatrical release this year. The film also picked up the Audience Choice Award at the Phoenix Film Festival and Best Director at Golden Door.

- I continue to work with Franco Sama at Samaco Films to develop and budget film and TV projects. The Minneapolis Lakers film project looks like it might be funded by August, but in the meantime, Franco and I continue to work with that same North Dakota-based producer on numerous other projects as well. We've got a great collaborative vibe.

Now for some new news:

- I recently signed on to produce a new feature film in Oklahoma called "Will to Win" with a minimum budget of $3 million. I am currently working with two other producers and the screenwriter to get the script done. It is based on the book of the same name by Jim Stovall, who wrote "The Ultimate Gift," features Will Rogers as a main character, and is the first feature film to secure the official blessing and support of the Will Rogers Estate. We're also working with the Cherokee Nation, State of Oklahoma and Will Rogers Museum. The story is about a young Cherokee high school girl who joins the boy’s baseball team when softball is cut, drawing the ire of the school board president, who is determined to see her removed. Through the girl's vivid imagination, she enlists the help of Will Rogers himself as her spirit guide, whose wisdom and humor help her to discover the "will to win."

- My client Athena, talented author of the "Pillars of Dawn" book series, will be retaining me to help her develop them into a viable series, shop them to platforms, create new content and consult on her professional career.

- All this while my wife and I plan a trip to Italy later this year! I've always wanted to go, but because of COVID, we've had to delay our plans for the last two years. But we recently booked our flights and hotels, so it's real now! We will be going to Venice, Milan, Florence, Pisa, Cinqueterre, Rome, Naples, the Amalfi Coast, Capri and Palermo, Sicily. It should be pretty epic between the food and architecture and history and culture. Bravissimo!

See what I mean? Slammed! Again though, I can't complain because I'm doing exactly what God put me here to do. And I love it. But man, that doesn't mean I can't dream of some downtime now and then! More to come soon...