I recently returned from Knoxville, Tennessee after completing principal photography on my latest feature film, Homestead. I can honestly say it was one of the most challenging experiences of my professional career -- for both reasons inside and outside of our control. But hey, they say what doesn't kill you makes you stronger, right? (Well, that's what they say anyway.) While I'm happy to be done with that excruciating part of the process, I'm very proud of the quality footage we got. Now, it's all about turning those beautiful images into a worthwhile movie. Our goal is to first attend a top-tier festival like South by Southwest and drum up interest. With the quality of the set design, cinematography, script and cast, I think we have a shot. Leven Rambin, Shane West, Jake McLaughlin, Dee Wallace and Sohvi Rodriguez all turned in fantastic performances.

On another front, I was pleasantly surprised to see a feature film I produced in 2020 called Take the Night (formerly The Inheritance) finally emerge from its long slog through post production and make an appearance at the American Film Market courtesy of sales agent Motion Picture Exchange. With any luck, you'll be seeing that film on your TV screens in the next couple months. I dig the poster... 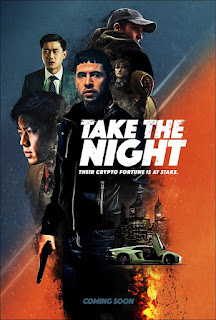 Moreover, both films received a good amount of publicity over the last month. Here are just a few articles that were written about them in prime publications like Deadline and Screen Daily:

So, what's next? I've really managed to expand my client base and have been developing a number of projects with filmmakers around the country, from New York to Oregon to North Carolina. I'm honored that so many entrust me with their creative "babies." It's a true honor. A couple of the most promising projects include NYC-set boxing drama Worth the Fight with Sean McNamara attached to direct as well as action-comedy The TacoMan, set in Tacoma, Washington. While I don't expect I'll be filming anything else in 2021, short of maybe a last-second commercial or two, I do believe 2022 is teed up to be a real winner, both in terms of brand new productions and those that are facing release.

Thanks for following. More to come.