A lot has happened since my last post in March. Here are the highlights:

My $6M feature film Worth the Fight has inched closer to the starting line with the attachment of my friend and colleague Sean McNamara as director. Sean's past work includes films like Soul Surfer, The Miracle Season and The King's Daughter as well as the upcoming Reagan biopic starring Dennis Quaid. With Sean's involvement, I'm confident we'll be able to attract the kind of cast that will secure a greenlight from our financier.

I managed to attach some great names to the animated feature I'm packaging for client FreeWill Films. Titled SPACEjunk!, the kid-friendly adventure now features the voices of Ed Asner (Up), Mischa Barton (The OC) and Robert Patrick (T2: Judgment Day). The next step is to set the project up with an animation studio. (I've already got a few in mind.)

I just completed shooting my first full production since the onset of COVID, a commercial through Butcher Bird Studios for an aerial technology solutions company. The two-day shoot went extremely smooth, with one day on a green cyc and another at the famous Blue Cloud Ranch where we got to play with all sorts of fun toys, from drones to Hummers to bomb-sniffing robots. Looking forward to seeing the final content, which will likely include multiple spots.

I also oversaw a multi-site photo shoot for electric vehicle infrastructure company EVCS, which has been responsible for the installation of over half of all non-Tesla EV chargers in Los Angeles since 2020. The stills will be used in cross-platform marketing campaigns such as print, digital and web.

My latest feature film, The Inheritance, recently completed post production and is in the process of securing distribution. My hope is that it will see a release to streaming and home video platforms later this year.

I've been working with numerous clients on several new development projects -- mostly features -- which would shoot in various states across the country if financed, including Texas, Tennessee, Oklahoma and Washington. My work has included script development, budgeting and business plans aimed at preparing the material for investor pitches. I've also been approached by a past client for some more commercial work and a new client for a review of her novels, so this looks to be a busy summer.

On a Personal Note

My wife and I have enjoyed seeing long-time friends and attending social events as the world slowly wakes back up from the lockdowns. We've already planned our latest vacation, too. This year, we'll be traversing the Midwest starting in St. Louis, Missouri and traveling through Iowa; Chicago, Illinois; Indiana and Ohio. After this trip, I will have visited 37 states in this great country of ours, with the others soon to come! Life is good :)

Looking forward to seeing what else 2021 has in store. Because one thing is for certain: you never know what the cosmos has planned for you. Just take things one day at a time and be grateful for every day you get to do what you love! 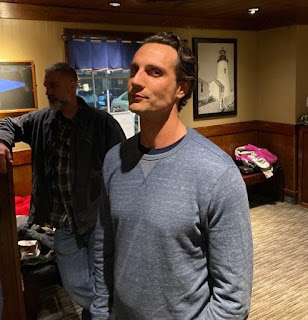